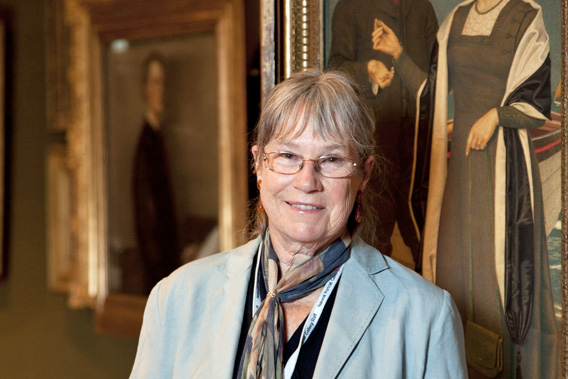 Currently [2018-2020] I am curating the exhibition Pre-Raphaelite Sisters: Models, Artists, Muses for the National Portrait Gallery, due to open in October 2019.  This extends my earlier research and publications relating to women and the Pre-Raphaelite movement, which includes books on Elizabeth Siddal, Christina Rossetti, Jane Morris, Marie Spartali Stillman and others. Until 2017 I was on the team compiling full catalogue entries for the portraits in the NPG Collection of later Victorian personalities – those who flourished between c.1860 and c.1900, which involved examination of several hundred portraits and extensive research into their production, history, provenance and position within the Collection, together with complete iconographies in all media, thus creating a unique scholarly perspective of portraiture in the later nineteenth century. See Later Victorian Portraits Catalogue. Associated case displays marked the centenaries of the deaths of composer Samuel Coleridge Taylor (2012) and Jane Morris (2014).

After studying English literature at Cambridge I took a post-graduate course in social studies at LSE, then a DPhil exploring poetry and culture 1900-1914 at the University of Sussex. My first book was a critical biography of Edward Thomas, followed by the cultural history of the late Victorian Back-to-the-Land movement, and then Pre-Raphaelite Sisterhood, a keynote inquiry into gender relations in the nineteenth-century art world. This led me to co-curating the exhibition Pre-Raphaelite Women Artists (1995-6) and to major biographies of Christina and Dante Gabriel Rossetti. In 2003-4 I held a Leverhulme Research Fellowship at the National Portrait Gallery, researching the representation of men and women of African ancestry in the nineteenth century, in preparation for the exhibition Black Victorians (Manchester 2005, Birmingham 2006). Along the way I published a biography of Jane and May Morris and The Legend of Elizabeth Siddal (alongside an exhibition of her drawings) and co-edited the Collected Letters of Jane Morris. I am a trustee of the William Morris Gallery and past president of the William Morris Society, in which capacities I have written and lectured on William Morris’s lifelong relationship with reading, writing and printing books. In 2017 I participated in the May Morris: Art & Life exhibition and catalogue published by Thames & Hudson for the V&A.

The visual representation of ‘Black Europeans’ of African ancestry from the medieval to modern eras remains a major interest, so I have been delighted by the long-term loans to the Gallery of the portraits of Ayuba Suleiman Diallo and Ira Aldridge. In 2015 and 2017 I was a panellist at Black Portraitures II, and III, organised by New York University in Florence, Italy and Johannesburg South Africa. In 2015 I co-curated the first solo exhibition of works by Marie Spartali Stillman, seen at Delaware Art Museum, Wilmington DE, together with a full catalogue. In 2015 I presented papers at the ‘Ruskin the Educator’ conference at Anglia Ruskin University, Cambridge (on Sesame & Lilies) and at the Julia Margaret Cameron bi-centenary conference at the University of Portsmouth. Recent publications include an essay on John Ruskin’s Sesame & Lilies, and an unpublished early drawing by Simeon Solomon.

To see more of Jan’s research activities, visit her academia.edu page and http://janmarsh.blogspot.com/