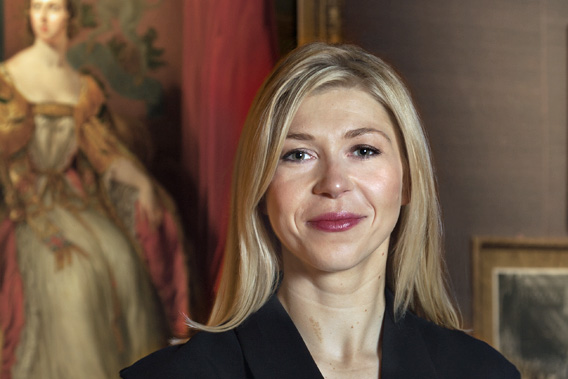 As Curator of Photographs (Content and Interpretation) I develop and curate the annual photography exhibitions and displays. Recent examples include Only Human: Martin Parr, the Taylor Wessing Photographic Portrait Prize, John Stezaker: Portrait, Black is the New Black: Portraits by Simon Frederick, Thomas Ruff Portraits, We Are Family, Double Take: Akram Zaatari and the Arab Image Foundation; David Gwinnutt: Before We Were Men; Out of the Shadows: Portraits by the Douglas Brothers; and the touring display, Speak it’s Name!, celebrating LGBTQ voices at Sissinghurst Castle, Kent.

I also contribute to the Gallery’s public programme of talks and events, generate interpretation for permanent collection displays, contribute to Gallery publications and answer public enquiries.

I became interested in photography while reading History of Art and English Literature at the University of Edinburgh, and took an MA degree in Photography (Historical and Contemporary) at Sotheby’s Institute of Art, London. After graduating I assisted a contemporary artist and completed an internship at the arts organisation Autograph ABP, contributing to the exhibitions James Barnor: Ever Young and The Paris Albums 1900: W.E.B. Du Bois. I received an AHRC Collaborative Doctoral Award in 2010, completing a PhD in post-war Polish photography, jointly supervised by the University of Essex and Tate. Before being appointed Associate Curator of Photographs at the National Portrait Gallery in 2016, I lectured on the history and theory of photography on the MA Photography at Sotheby’s Institute of Art, London, leading courses on Twentieth Century Photography and Photographic Theory.

My research interests focus on twentieth century photography, with a particular interest in Eastern European art. In 2013, I convened and chaired an international research seminar at Tate Modern on post-war Central and East European photography with Karolina Ziębińska-Lewandowska, and presented a paper on Zofia Rydet’s photographic atlas of Polish domestic life at the 2015 Tate conference, Fast Forward: Women in Photography

My doctoral thesis draws on psychoanalytic theories of trauma to interrogate works produced by Polish photographers in the wake of the Second World War, years in which Poland underwent a series of transitions and changes. I explore the ways in which these experiences manifest themselves indirectly or obliquely in the art of the period. Photographs made in the post-war years provided a space to belatedly return to encrypted traumas, to relay ideas that could not otherwise be articulated, and to acknowledge events that had been disavowed.

‘The Woman Behind Photography’ (online article, 2016)

‘Challenging the Order of Things: a call to arms in Karen Knorr’s Academies’ (exhibition catalogue, 2009)