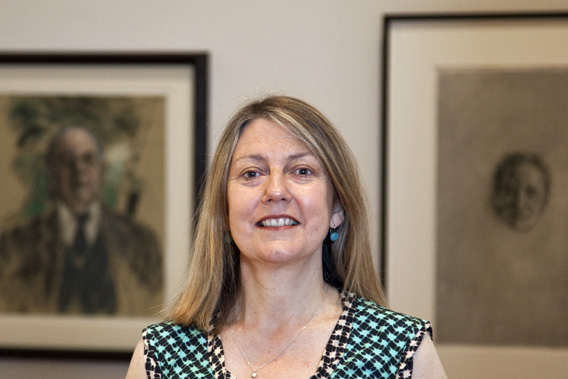 As the Senior Curator of Contemporary Collections at the National Portrait Gallery, I am responsible for the care of the Contemporary Collection including Gallery acquisitions and contemporary exhibitions and displays. I am also the lead curator responsible for the research into the Lucian Freud Archive; an important archive comprising Freud’s sketchbooks, drawings and letters, allocated to the National Portrait Gallery in 2015 from the estate of Lucian Freud through the Acceptance in Lieu Scheme. One of my key roles is the managing of Gallery commissions, which have included Sam Taylor-Johnson’s portrait of David Beckham (2003), Michael Craig-Martin’s portrait of Zaha Hadid (2008) and Gillian Wearing’s portrait of Shami Chakrabarti (2011). I have curated major exhibitions for the Gallery: David Hockney Portraits (2006), Lucian Freud Portraits (2012), Gillian Wearing and Claude Cahun: Behind the Mask, Another Mask (2017) and Tacita Dean PORTRAIT (2018). I have curated displays including Alex Katz Portraits (2010), Catherine Goodman: Portraits from Life (2014), Friendship Portraits: Chantal Joffe and Ishbel Myerscough (2015) and Lucian Freud Unseen (2016).

Before joining the Gallery in 2001, I worked for Angela Flowers Gallery as an Artist Liaison Manager in London and then in Santa Monica, California as Director, where I set up a new space specialising in British figurative art. I judge the annual BP Portrait Award and in 2013 I judged the Nordic Portrait Prize in St Petersburg and the Brygger J.C: Jacobsens Portræt competition in Fredericksborg. I also sit on the jury for the Royal Drawing School residency programme.

Since 2001, my focus has been on contemporary portraiture. Within this genre I have a particular interest in self-portraits and the work of David Hockney and Lucian Freud.