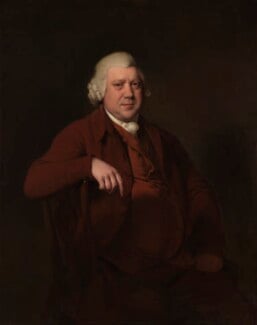 This newly rediscovered portrait is a compelling image of a fascinating and complex self-made man, the first of the 'cotton kings' and one of the giants of the Industrial Revolution.

Arkwright's story is an early example of the 'rags to riches' narrative. Born the son of a tailor, he began life as a poorly educated barber. The cotton-spinning frame, for which he is famous, was invented in Preston in 1768 and patented in 1769. In 1771, he established his first water-powered cotton mill at Cromford in Derbyshire. There he developed a major industrial empire and is acknowledged as the founder of the modern factory system. The year after this portrait was completed Arkwright was knighted.

Joseph Wright of Derby was one of the great late 18th-century artists. He took a keen interest in industrial and scientific developments, and his images of 18th-century industrialists are some of the most arresting and telling portraits of the age. This frank and penetrating image is Wright of Derby's first portrait of Arkwright. It was painted at the height of his powers in the mid-1780s and brilliantly captures the man who was later described as a 'plain, almost gross, bag-cheeked, pot-bellied Lancashire man'.

It is proposed to acquire the portrait jointly with the Harris Museum and Art Gallery at Preston, Arkwright's birthplace, following the precedent of two previous joint acquisitions with other institutions, with each Gallery raising half the funds. The picture would not be subject to frequent movement but over time it would be seen in tellingly different contexts at each venue.

Please help us secure this remarkable portrait for the Nation