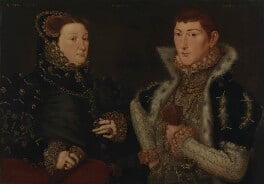 Hans Eworth's Lady Dacre, and her son, Gregory Baron Dacre, painted in 1559, is one of the great gems of Tudor portraiture, in immaculate condition for an early panel. It has been on loan to the Gallery since 1984 and is on display in Room 2, where it plays an essential part in understanding the Elizabethan period, as one of the few family portraits on view.

Mary Neville, Lady Dacre was the widow of Thomas, 9th Baron Dacre, who had been executed in 1541 and whose titles and honours were forfeited. Although Lady Dacre married twice subsequently, she continued to campaign for the restoration of honours to her son. Gregory and his sister had their titles restored by Parliament in 1558, and he became 10th Baron Dacre. The family went on to found Emanuel Hospital, now Emanuel School in Wandsworth, and to acquire Thomas More's house in Chelsea. They were important members of the nobility with close links to court and the seat of power in Tudor England.

This choice double portrait has been described as 'one of the finest works to be painted in Britain in the mid-16th century'. It is one of the acknowledged masterpieces of Hans Eworth, the most talented painter working in England following the death of Hans Holbein. The role of Lady Dacre as female patron is particularly telling, as she is placed on the left side of the pairing, traditionally reserved for male authority.

The portrait was once owned by the great 18th-century collector, Horace Walpole, at Strawberry Hill. It has been the subject of extensive research and technical analysis at the National Portrait Gallery, as part of a project to explore the working practices of Tudor artists. It is unique as one of the earliest surviving double portraits of non-royal sitters and as a remarkable depiction of matriarchal power.

This outstanding portrait is on offer to the Gallery for £997,500, a substantially reduced price following tax remission. The Art Fund has most generously promised £300,000, and the Gallery's Portrait Fund £200,000, its largest ever grant. We are approaching the National Heritage Memorial Fund for support but we will still need to find a further £97,500 by 31 December 2008.

Please help us secure this remarkable portrait for the Nation.