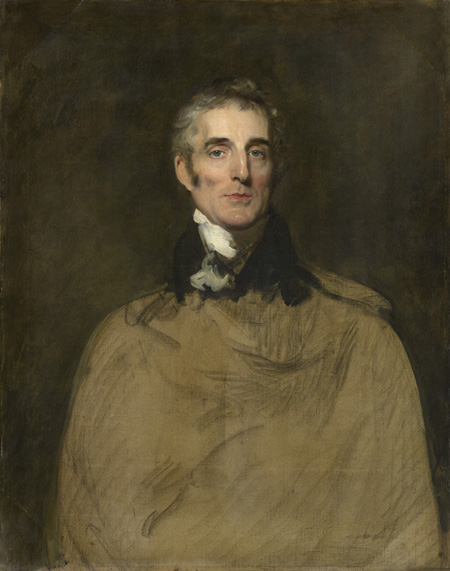 After a successful fundraising appeal to raise £1.3 million the Gallery was able to announce in April 2017 that it had secured Sir Thomas Lawrence’s last portrait of the Duke of Wellington. Support for the appeal included generous grants from the Art Fund (£350,000), the G and K Boyes Charitable Trust (£200,000) and National Heritage Memorial Fund (£180,000) as well as donations from more than 500 donors across the UK. This acquisition remedies one of the most significant gaps in the National Portrait Gallery’s Collection and concludes a search of 160 years.

Sir Thomas Lawrence painted the Duke of Wellington eight times in fifteen years and was his arch image maker. This unfinished painting, known as the ‘Jersey’ portrait, was commissioned by Lady Jersey who was a leading political hostess of the time. It was made just before the artist’s death and is one of his most successful portraits of Wellington. It was relatively unknown prior to its loan to the Gallery in 2014 as it had never been publicly exhibited in Britain.

Now that this wonderful portrait has entered the national Collection, it will remain on permanent display in Room 20, work for future generations to enjoy. It will greatly enhance our schools programme as part of our presentation of the historical collection and of early nineteenth century politics and public life. The Gallery, already a centre of expertise on Sir Thomas Lawrence, has the largest and most accessible single collection of the work of this artist. This portrait will be one of the finest examples and, because it is unfinished, is an important insight into Lawrence’s working practice.

Wellington is a titanic figure in British history. Our only Field Marshal Prime Minister, a man of genius on and off the battlefield. This arresting portrait must sit in the national collection, and now following an outpouring of generosity, it will do. The artist has captured the Duke’s legendary demeanour. Among his many contributions to British life he forged the masculine culture of unbending froideur in the face of adversity. It is as special as a work of art as it is as a primary source.