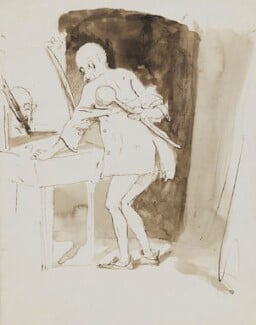 Issue 31
Taken from the Face to Face newsletter

SIR EDWIN LANDSEER (1802–73) was one of the most successful and accomplished painters of the Victorian period. Above all, Landseer is remembered for his technically brilliant and emotionally charged animal paintings such as The Monarch of the Glen. In later life he sculpted the colossal bronze lions at the base of Nelson’s Column in Trafalgar Square, London. He was Queen Victoria’s favourite painter and remains an enduringly popular and much reproduced artist.

This past display exposed a far less familiar area of Landseer’s artistic practice: his abundant and witty pen-and-ink portrait sketches of his friends and patrons. Many were produced as an entertainment during extended holidays in the hunting lodges of aristocratic patrons in the Scottish Highlands. A good proportion of them were left with his hosts and remain in private hands, but the Gallery has an excellent collection of these amusing and idiosyncratic drawings.

Landseer regarded his subjects with an affectionate eye, but was quick to note any physical peculiarities. The banker and poet Samuel Rogers was a frequent subject, whose cadaverous features and eccentric behaviour made him ideally suited to the caricaturist’s pen. A drawing of Rogers scratching his back indicates the degree of intimate access to his subjects that Landseer enjoyed. Meanwhile, the rapid sketch of William Makepeace Thackeray, author of Vanity Fair, shows the vitality of Landseer’s draughtsmanship, and his drawing of Sydney Smith, the essayist and wit, demonstrates his invention. Smith’s obesity was much commented upon, while the inclusion of an even fatter friar and an impish devil may allude to the unusual duality of his roles as political firebrand and Canon of St Paul’s Cathedral.