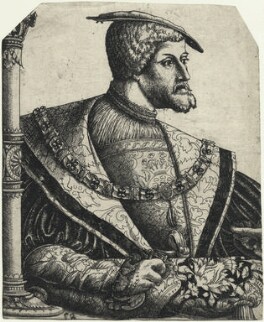 Issue 28
Taken from the Face to Face newsletter

From our schooldays onwards, many of us have a very clear idea of Henry VIII’s appearance: relatively small features; a broad face framed by a red-tinged beard; probably wearing a floppy, feathered hat. If we go beyond his face we might picture a tall, broad man standing with his feet wide apart. We do not have this familiarity with earlier English kings and neither do we, I would suggest, with many later ones. This sense of knowing the king largely derives from the images created by Hans Holbein the Younger (1497–1543). So powerful was Holbein’s portrait that its essentials are remembered even though the original, a mural in Whitehall Palace, was lost in a fire over 300 years ago.

The past display that featured in Room 16 looked at a variety of printed portraits of Henry VIII, some based closely on Holbein’s portrait and some less so. It has been interesting to find, during the preparation of the display, that although many of these prints initially appear to differ dramatically from the standard image of the King, they also display many familiar features. The feathered hat is frequently shown (sometimes topped, rather awkwardly, with a crown) and the full-face pose of many of the prints recalls Holbein’s final design for his Whitehall mural. It is difficult to know exactly what sorts of images were available to the engravers producing these prints in the centuries after Henry’s death, but it appears that Holbein’s portrait, in whatever form, cannot have been too far away from many of them. 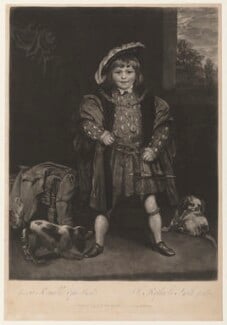 It is satisfying to be able to include a large-format print reproducing the Whitehall mural, as the Gallery possesses the preparatory cartoon for the left-hand side showing Henry VII and Henry VIII. The print, by the antiquarian and engraver George Vertue, was based on a painted copy of Holbein’s mural made for Charles II. As the original was destroyed in 1698, we rely on the evidence of the cartoon and the painted and engraved copies in order to get an idea of its appearance. Being able to see the print and the cartoon in fairly close proximity will, I hope, provide visitors with a good idea of how impressive the original must have appeared.

Although these are not the primary focus of the past display, it is difficult to consider Henry VIII without looking at the most significant events of his reign: his divorce from Katherine of Aragon and the consequent breach between the English Church and the Catholic Church in Rome. Portrait prints of both Katherine of Aragon and Anne Boleyn were included, each from separate publications that contained one or the other for different reasons. Also included were prints of significant figures within Europe such as Pope Clement VII and Emperor Charles V (Katherine of Aragon’s nephew) and of the ministers who carried out Henry VIII’s policies. The final part looked at the way Henry has been ‘played’ in the centuries since his death: within the section was a print of Reynolds’s charming portrait of four-year-old Master Crewe dressed as Henry VIII, and photographs of actors playing the role on stage and screen.