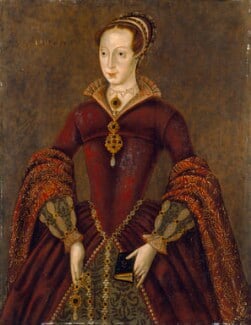 Issue 31
Taken from the Face to Face newsletter

LADY JANE GREY is remembered as the innocent victim of her family’s heartless ambition. She has also been cast as a Protestant martyr and an exemplar of female virtue. Celebrating the Gallery’s recent acquisition of an early panel portrait of her (right), this display explores how artists have responded to the ‘nine days’ queen’ as both a historical figure and a romantic heroine.

Born in 1537 to Henry and Frances Grey, later Duke and Duchess of Suffolk, Lady Jane was the granddaughter of Henry VIII’s sister Mary. Under the terms of the king’s will, the Suffolk family stood fourth in the line of succession to the throne. Consequently, Lady Jane received a princess’s education. She was precociously intelligent, reading Greek, Latin and Hebrew, and was a staunch advocate of the newly established Protestant faith.

With the accession of the nine-year-old Edward VI in 1547, the English court became embroiled in a sequence of complex power struggles in which Lady Jane, the king’s cousin, became a pawn. As Edward’s health deteriorated, the powerful nobleman John Dudley, Duke of Northumberland, persuaded the young king to exclude his half-sisters Mary and Elizabeth and decree that the crown should instead pass to his cousin Jane. She was then hastily married to the Duke of Northumberland’s son, Lord Guildford. 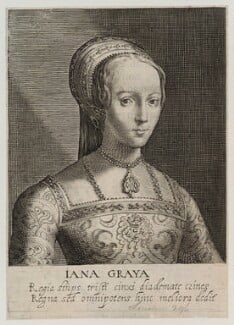 Northumberland’s hold on power seemed secure when Jane was proclaimed queen on Edward’s death in July 1553. However, Mary’s Catholic supporters staged a rising, Northumberland’s army melted away and just nine days later the reign of Queen Jane was over. Although her innocence was never doubted, Jane’s existence as a possible figurehead of Protestant revolt made her an unacceptable danger to the new regime. She was executed on 12 February 1554, aged 16.

The factual details of her life were swiftly consumed by myth and it is improbable that a more rounded historical personality will ever emerge. Any study of Lady Jane Grey is hampered by the dual obstacles of a scarcity of original documentary evidence and an abundance of dubious anecdotes and partisan secondary sources; there also appears to be no reliably authenticated lifetime portrait in existence.

One of the earliest known attempts to present a credible image of Lady Jane is the panel portrait recently acquired by the Gallery, which features alongside this display. It dates from the period when England’s Protestant legacy was secure and Lady Jane’s status as a martyr to the Protestant cause was being reconsidered. The majority of the display charts the expansion of her posthumous iconography through prints produced from the seventeenth to the nineteenth centuries, when the popularisation of historical study and the promotion of an English school of history painting resulted in a remarkable expansion of scenes from her life.