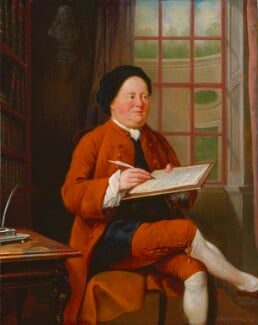 Samuel Richardson
by Mason Chamberlin
1754 or before
NPG 6435

Issue 33
Taken from the Face to Face newsletter

American Lawyer and author Louis Auchincloss died on 26 January, aged 92, and an obituary was included in the Daily Telegraph a few days later. He was a benefactor of the National Portrait Gallery. One day in March 1998, I received a telephone call from reception. There was a gentleman at the desk. He had come in without an appointment. He had a photograph of a picture. Would I come down and see him? Curators are often faced with such interruptions, perhaps at a critical moment when they are completing a display or an exhibition which will be seen by thousands. Should one break off just for one person? As a rule, curators want to be helpful if they can, and I responded accordingly.

There was a distinguished-looking gentleman in reception. ‘My name is Louis Auchincloss. I have a photograph of a portrait which I would like to show you, if I may,’ he politely suggested. A glance revealed a portrait of interest. Was it vaguely familiar? ‘Let me look in our Archive,’ I replied, taking refuge in the accumulated knowledge of generations of curators. I found that my predecessor as 18th Century Curator, John Kerslake, had published the painting as ‘collection unknown’ in his listing of portraits of the novelist Samuel Richardson. In his catalogue, he attributed it to a significant middle-ranking artist, Mason Chamberlin.

I showed the catalogue to Mr Auchincloss and it was clear that he knew a great deal about the portrait. It emerged that he had been given it some forty years previously by a friend and client, Robert D. Brewster, who had bought it in London for £30 towards the end of the Second World War. ‘Might you be interested in having the portrait as a bequest, perhaps?’ he asked. I responded positively, saying that I would need to take it to our fortnightly Curatorial Meeting. When I wrote back to him, following the meeting, to express our great enthusiasm, he ventured to suggest that he might make the portrait a lifetime gift, writing: ‘When I returned to my apartment here [New York] and looked at Mr Richardson, I seemed to fancy that he was telling me: “Look! You’ve had me for fifty years. Isn’t it time that you sent me where I obviously belong?”’

Louis Auchincloss made his donation through the American Friends of the National Portrait Gallery. The portrait remains on display to this day in Room 10 and I encourage you to see it. Although it is very small, painted in oil on copper in about 1754, I think it is the finest 18th-century portrait to have been given us in my twenty-five years at the Gallery. It was painted for Samuel Richardson’s friend Arthur Onslow, Speaker of the House of Commons. The portrait was described as a ‘speaking likeness’ by Thomas Edwards, another friend, and shows Richardson in a characteristic pose, writing ‘upon a little board ... held in his hand’. In the background is a bust of Milton, whose works Richardson much admired.

Thanks to the generosity of Louis Auchincloss, Samuel Richardson has indeed returned to where he obviously belongs!