My Favourite Portrait by Brian Griffin 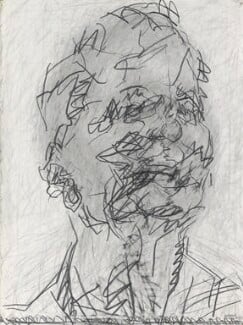 When I look at his self-portrait, Frank Auerbach gives me the impression of being a recluse. I find that romantic, something that earns my respect. Walter Richard Sickert, who I believe is an influence on him, comes to mind whenever I read or hear Auerbach’s name or view one of his paintings. Maybe it’s because the paint appears almost glutinous upon the canvas in a lot of his works. However, this piece is different, being a drawing. He is without doubt one of the three great English artists of his generation, along with Freud and Bacon.

I have read that Auerbach works from a small studio in Camden Town, remains intensely private and can only be communicated with by letter. I would find it hard to recognise him if he passed me in the street, and his self-portrait fails to assist me in picturing his physical make-up, but, believe it or not, it surrenders his personality to me totally. However, if I work hard enough, which this portrait entices me to do, I can paint a portrait of Auerbach in my mind’s eye.

From the first moment I walked around a corner in the Gallery and was confronted by this, I was fascinated. The viewpoint of the drawing is from a low angle. A viewpoint normally chosen to render a person strong, powerful and proud, this confuses almost in a schizophrenic sense, for we cannot see the man! What we see is a somewhat gauze-like depiction, with a series of charcoal lines defining the features: it in fact resembles a mask. Our imagination is required to fill in the rest of the facial features, but how easy that is. Auerbach helps us, for just behind this mask lurks a delicately shaded charcoal mass, a foggy solidity in the shape of his head, looking at us as we naively fill in the details in our imagination – a ‘painting by numbers’ process. Then we finally arrive, inspired, at our impression of Auerbach’s head, strongly confrontational, private, but giving, and therefore respecting its audience.

Brian Griffin’s work is found in collections throughout the country. He studied at Manchester Art College and was cited as ‘Photographer of the Decade’ by the Guardian in 1989. In 2005, a Retrospective of his work was exhibited at Reykjavik Art Museum, Iceland, and in 2006, Griffin received Honorary Fellowship of the Royal Photographic Society.