My Favourite Portrait by Bruce Oldfield 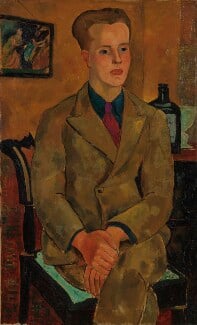 It’s always difficult when you’re asked to choose one item to highlight in a collection, particularly when it’s from my favourite London Gallery.

On this occasion I made no hesitation and headed straight up to the first floor and into the Early Twentieth Century Gallery.

I’m drawn here because of my long-time interest in the art and writing of the interwar period and find it interesting to see how like minds saw each other and how artists perceived and represented themselves.

It’s a room of contrasts from Mervyn Peake’s manic self-portrait to the elegant image by Gerald Brockhurst of the Duchess of Windsor, but the picture that engages me most is Christopher Wood’s stylish and telling portrait of the pianist and composer, Constant Lambert.

Both men were in their twenties, both highly regarded in their own field, inhabiting the elevated Bohemian circles in London of the Sitwells, William Walton and the Nicolsons, and in Paris of Diaghelev, Picasso and Cocteau.

The painting shows a rather fey Constant Lambert sporting a navy shirt and a vivid fuchsia tie sitting uncomfortably upright, his hands crossed in his lap. Behind his right shoulder sits a very large bottle of gin and a single glass. He was to die 20 years later of chronic alcohol abuse while Christopher Wood threw himself under a train at the age of 29.

Bruce Oldfield OBE has been one of our foremost fashion designers for 30 years, and his glamorous creations have been sought after by many well-known names such as Jerry Hall, Barbra Streisand, Catherine Zeta-Jones and Diana Ross.