My Favourite Portrait by Camillia Batmangheligjh 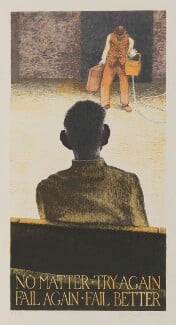 In portraits, face to face, normally the subject and the onlooker lock gaze. So it was a surprise to be greeted by the back of Samuel Beckett’s head. It is arresting in the stillness: regal and humble combined. Grey and sepia tones invite viewers into a reflective space.

Much of our day is encountering shadows, individuals walking past, surviving the margins of society. The human being that Beckett is staring at represents a frozen moment tight-roping between hope and despair. The message is so poignant: ‘No matter. Try again. Fail again. Fail better.’

We live in a culture where people show ‘face’, presenting a public presence where failures are denied for fear of not being chosen. Much of the human condition is about trial, error and the murky space of emotional fragility. To deny shadowed parts of the self is to deny a profound sense of beauty and truth.

This portrait reminds me of the abandoned young people Kids Company works with. Face to face with the public, they are feared and despised. Turned away from negative scrutiny, the extraordinary dignity of children surviving abuse illuminates.

Annually some 550,000 children are referred to child protection services, but only some 33,000 are registered for help. To lower costs, some 30,000 are de-registered within the year. Exceptionally vulnerable children live in the underbelly of our cities, invisible to the civil process; they are unable to command attention because they do not vote. With no power to hold anyone accountable for a safer childhood, they protest. Reflecting back our disturbance, we punish and blame them.

We failed them, they fail, and yet they try again, in hope that we’ll do better.

Honesty demands that we face inward, scrutinising our own choices rather than lock gaze with pretence.

When facing the dark, there is courage for light.

Camila Batmanghelidjh, who trained as a psychotherapist, is the founder of two children’s charities – The Place 2 Be (now national) and Kids Company where she currently works with some of the most traumatised young people.

Kids Company was set up in 1996 and reaches 13,500 children a year with therapeutic and social work support. Camila and her team have raised £50 million over the years to help London’s most vulnerable children.