My Favourite Portrait by Fergus Greer 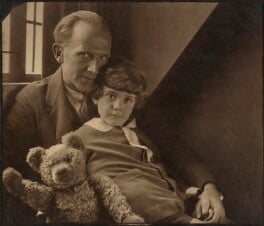 There are four things that are needed for me to be passionate about a portrait in whatever medium.

First and foremost, it must move me: that sense of metaphysical response when seeing a work, almost like rapture.

Secondly, the trail of clues to the subject(s), the artist and then their relationship; if it is well done one feels the need to revisit a work continually and find new information to feed one’s imagination about any of the three.

Thirdly, the way that the artist has carried out the work, and the quality of his representation within that medium.

Fourthly, the time and place and the social context of the period and how it is represented within the picture: fashion according to the artist.

This ‘little’ picture, by Howard Coster, belies the story it depicts. Here we have what would appear to be little more than a family portrait and yet when we learn of the subject matter it begins to take on a whole resonance of further meanings and interest.

A.A. Milne, the author of such great iconographic children’s books as Winnie-the-Pooh, sits tucked into a narrow window-seat, his face appearing through the shadows cast by the back light of the window. He bears a rather awkward expression, maybe of discomfort; disapproval; or simply that the photographer doesn’t engage him. Sitting confidently on his lap, wrapped in his father’s arms, is his son Christopher Robin, made world-famous by his depiction in his father stories. Christopher Robin in turn, has gently resting against him, waving directly at the observer, Winnie-the-Pooh, his teddy bear, who through his depiction in his father’s books is one of the most loved and renowned characters throughout the world, equalled only by the likes of Mickey Mouse!

The father’s hand rests lovingly and protectively on top of his son’s.

The part each subject plays and reflects to the others and the dynamic of love going through them are so clearly apparent. One has to ask whether, if A.A. Milne had  realised the significance of his books, written for his son, he would have so openly depicted his son as the subject. Imagine what it must have been like being Christopher Robin.

We can only guess whether Howard Coster posed this picture, or if when asked to sit down they fell into this natural pose, the back-lit image adding to the sense of intimacy between the three, as they sit looking expectantly at the camera. A moving tribute to the artist and his subjects!

Fergus Greer started by assisting several photographers; he then quickly secured a contract with the Sunday Times Magazine (for covers) and other magazines. In 1997 he moved to Los Angeles to pursue his career. He has exhibited in a number of exhibitions, including the Venice Biennale 2005, as well as winning numerous awards. He has recently moved back to the UK and continues to work for a variety of publications including Vanity Fair, New Yorker, Fortune, Marie Claire, GQ and Esquire.