My Favourite Portrait by Harriet Walter 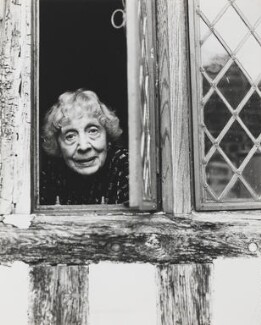 This Photograph by Snowdon not only captures the remarkable individuality of the actress but also says so much about the actor’s attitude to the onlooker. Dame Edith’s regard contains all the ambivalence of a private woman protected and framed by the walls of a building, but with the compulsion to communicate, question, look out on the world through that totally open window. The face that peers out is engaged and curious but almost reluctantly extrovert, wistful and bewildered as well as reminiscent of both the fearsome and the funny aspects of her acting personality. The grande dame of British theatre looks out like a vulnerable furry animal from a burrow, but we must not be fooled. She was a formidable theatrical giant in an era of theatrical giants and you don’t get to be that without ferocity and intelligence. Old age has lent her face an androgyny and paradoxically an agelessness; it is also the mask of an impish child. The achievement of the photograph is to remind one in stillness of the mobility and variety of her acting. Her reputation has been somewhat dominated by the famous two-octave ‘handbag’ line, uttered in her comical, querulous voice. This picture gives us time silently to contemplate her eloquent face.

Since training at LAMDA, Harriet has worked extensively in theatre, television, film and
radio. She started with groups such as Common Stock, Joint Stock, 7:84 and Paines Plough and then moved on to the Royal Court, National Theatre and the Royal Shakespeare Company.