My Favourite Portrait by Hugo Vickers 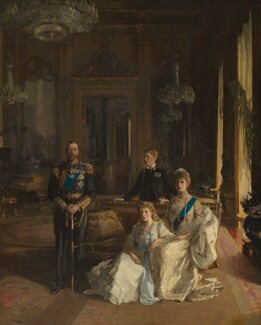 I first came to look at The Royal Family at Buckingham Palace, 1913 when I was a teenager, drawn by an interest in that generation of royalty, an interest that has not waned. I know much about the four depicted, and when I was very young, and they were somewhat old, I saw the Princess Royal and the Duke of Windsor. James Pope-Hennessy’s biography of Queen Mary I read at the age of thirteen. It is impossible to look at this picture without wondering how Lavery must have felt as he painted it – the orphan from Belfast, raised by relatives: a farmer with a harsh wife, then the owner of a pawn-shop. His career was boosted by collecting £300 from an insurance company when fire destroyed his studio.

And then the group – George V, a full-dress Admiral of the Fleet with epaulettes, a stalwart old constitutional monarch, who hated London, but never failed in his duty; Queen Mary, who submerged her private interests out of respect for the throne, and blossomed only in widowhood; the Prince of Wales, about to do his duty in the Great War, insofar as he was allowed, but destined to surrender his heritage for an unworthy wife; and Princess Mary, soon to be the heroine of the forces, who married the much older Earl of Harewood, and who, till her dying day, trembled with nerves before every royal engagement.

The war is about to come. The group will ultimately dissolve. A moment of serenity has been captured on canvas.

Hugo Vickers is a biographer, lecturer and broadcaster, specialising in the twentieth
century. He is Cecil Beaton’s appointed biographer, royal expert and author of several books, including The Private World of the Duke and Duchess of Windsor and Alice: Princess Andrew of Greece.