My Favourite Portrait by Jeremy Paxman 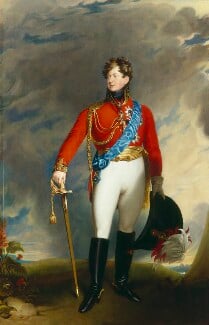 I like the paintings in Room 17 because the story that unfolds here is so amusing. The full-length portrait of George IV, painted when he was in his fifties but making him look like a man in his thirties, is so completely bogus that I find it very funny indeed. He is depicted as, I suppose, a Marshal of the army, in a red tunic and white breeches, boots, spurs, a marshal’s hat, a sash, a sword. He really ‘doth bestride the world like a Colossus’ – which is what the artist has set out to do, to show him as a towering, imposing, commanding presence. The reality was that he was about twice the size of the figure who appears in that picture; he was disgustingly corpulent. I think The Times described him as a man who was always more at home with a girl and a drink than with a sermon and politics. And that was his approach to life. He makes a completely implausible military figure, because right alongside him there is a picture, I think rather a good picture actually, of the Duke of Wellington and another one of Nelson on the other side, and something about these two characters – I can’t quite work out what it is – reveals that they are unmistakeably military men. Whereas George is just as unmistakeably not a military man. His nickname was the ‘Prince of Whales’ because he was so enormous. And he got so bamboozled by incessantly wearing military uniforms, of much greater grandeur than this one here, that he actually held forth at dinner with the Duke of Wellington and claimed to have taken part in a decisive cavalry charge at the Battle of Waterloo, to which Wellington replied, ‘So you’ve often told me, Sire’. His whole mind became addled by laudanum and drink, as his body completely went to seed. We get none of that in this picture: we get a portrait of a heroic figure.

Jeremy Paxman has worked on many programmes from reporting on Tonight and Panorama to presenting the BBC’s Six O’clock News and Breakfast News. Paxman joined the Newsnight team in 1989, and is now chairman of University Challenge. He was awarded Bafta’s most prestigious award for current affairs in 1996 and 2000 and is currently writing a book on royalty and their complicated marriages.