My Favourite Portrait by Jon Snow 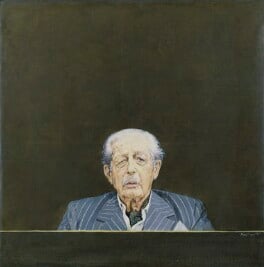 In feasting on the portraits here I find it impossible to divorce who they are and the thoughts and ideas they conjure, from the style and quality of the painting. Hence I am drawn to all Bryan Organ’s portraits and always have been. They are icons for a period of incredible transition in Britain’s public and political life. He captures both the passing of empire and of innocence. His Charles, and his Diana mark a brief and unreal moment when we all believed in the possibility of fairy tale. But in the end it’s his politicians I admire most. That’s why I love Organ’s Harold Macmillan. He portrays an old man who had the wit to spot the ‘wind of change’, but not quite to survive it. Choosing just one portrait is inevitably hard, battling as this one does with Organ’s nearby reclining Jim Callaghan. But in the end the eery framing of Macmillan with his battered moustache almost sinking behind the parapet of history, seals it for me. The texture and precision of the paint work reveal a crinkled lived-in aristocratic face that we now know masked much personal suffering over his wife Dora’s infidelity. It’s all here, and better still, its ours, for all time.

After successful stints first as Washington Correspondent and then as Diplomatic Editor for ITN, Jon Snow became the main presenter of Channel 4 News in 1989. He has won numerous awards for his work which has included covering such momentous stories as the fall of the Berlin Wall, Nelson Mandela’s walk to freedom, the American shuttle disaster and the Pope’s tour of Poland in 1983. Jon Snow is also the Chairman of the New Horizon Youth Centre, the Deputy Chairman of the Media Trust and a Trustee of the National Gallery.