My Favourite Portrait by Maev Kennedy 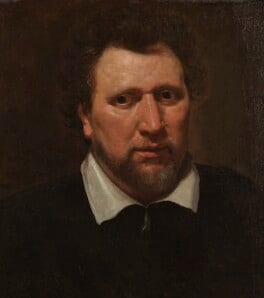 On the walls of the National Portrait Gallery, as in life, poor Shakespeare is constantly measured against rare Ben Jonson. The Chandos portrait of Shakespeare, the first in the Gallery collection, may be the only one claimed from life, but it has a dim half remembered third hand reportage quality, like a key cut from a copy of a copy which looks presentable enough but will no longer turn the lock: the enigmatic man from Stratford-upon-Avon has escaped again. Beside him Ben Jonson bristles with life, a clever, shrewd, funny man, and a burly one too, who might knock you down and jump on your bones if you said ‘But Ben, honestly, isn’t Bartholomew Fair a bit of a mess?’ Books send me to the Portrait Gallery, and the pictures send me hunting for books: Claire Tomalin’s marvellous biography sent me to find pretty kind Dora Jordan, but I left that day compelled to track down On Horseback through Asia Minor, after gaping at Tissot’s outrageous portrait of Frederick Gustavus Burnaby, ‘Soldier, traveller and balloonist’, lolling on a sofa clearly about to mount a punitive expedition on some unfortunate female.

Whatever my nominal objective, the Tudor Galleries hauls me back: Richard Crookback, straightbacked but so dangerous; thin lipped Henry VII, the man who killed him, fingers clenched on his implausible lover’s posy; jolly Francis Drake clasping the world, a ruddy man you might still meet in a West Country cider house; Sir Henry Lee, the Queen’s champion, guarding his secrets and his silk corded gold rings - from whom, for whom? And Ben, in his plain brown jacket, one of the quietest pictures in a rowdy gallery: he will not let you pass.