My Favourite Portrait by Marc Quinn 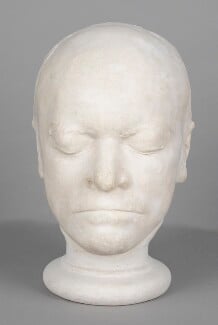 Deville's life cast of William Blake of 1 August 1823 is a hugely important work for me. I love the Faustian overtones of the artist’s name, which taps into the atavistic idea that any lifelike likeness is the product of a pact with the devil, but that is just an extra.

What for me is important is that this is a portrait of a living person and not a death mask and a portrait of a living person on a specific day, 1 August 1823 – that is what is so interesting about a life cast, it is like a 3D photograph, it is so immediate, and you can see that in the expression of concentration of consciousness that is there – this work is in the now.

It was this work along with the Khmer Bayon head of Jayavaman VII in the Musée Guimet which helped me develop the way to do Self, the latest incarnation of which is now in the National Portrait Gallery with the William Blake head.

To me the Blake head is a very direct work about being alive, a proto-avatar of Self. It also inspired one of Francis Bacon’s best early works, now in the Tate.

Blake is also an inspiration as a personality to me, a visionary autodidact who followed his own unique path – that’s the kind of artist, like Bacon also, that inspires me.

Which brings me to another quite contemporary idea: who is the author of the work? Is it a work of Deville or do we have to say that in fact it is the only known sculpture by William Blake? I would say the latter.

I have a cast of this piece on my desk in front of me as I write this and it keeps me believing in the power of Art.

Marc Quinn is one of the most prominent British artists working today. One of his most famous works includes the sculpture of Alison Lapper at Trafalgar Square.