My Favourite Portrait by Margaret Howell 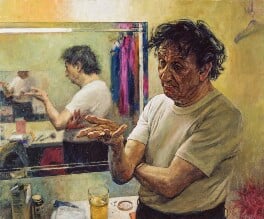 Is it only the person depicted that attracts us to a portrait? Why then did I find myself standing for some time in front of Ken Dodd? To me he was a figure from the past in whom I had little interest. Or so I thought.

It isn’t hard to capture Ken Dodd’s familiar likeness, with his clown-like hair and exaggerated teeth, but David Cobley’s portrait conveys real expression, giving us insight into an ageing professional in his own unique world. This small canvas achieves pathos by showing the weariness and care-worn stance of the performer back-stage. Cobley captures a poignant sadness in the eyes of the man whose nightly task is to get the audience to shine with ‘happiness’ as he waves his pink ‘tickling stick’ at them and makes them laugh. The fluffy stick itself rests on the dressingroom table alongside the squeezed tube of Brylcreem and the almost spent jar of rouge – the tools of Dodd’s trade. The scene is caught between mirrors, suggesting an endlessly recurring image, symbolic perhaps of Ken Dodd’s repeated performances in his quest to cover all the theatres and playhouses in England with his ‘Happiness Show’.

Yet, despite the melancholy, the painting is lively and colourful. Cobley’s subject is no clichéd clown but a complex man and artist whose expressive, repeated hand gesture declares enduring enthusiasm for his profession, as well as the energy held in reserve for the performance he intends to give after this very sitting.

From 1965 to 1969, Margaret Howell studied Fine Art at Goldsmiths College, University of London. After graduating she set up her own design studio and workshops, initially producing men’s shirts which developed into complete men’s and later women’s-wear collections. Her first London men’s shop opened in 1977 and the first one for women in 1980. She is now based in Wigmore Street, London, and retails internationally.

As a design company, Margaret Howell promotes a very particular aesthetic. With a commitment to British manufacturing, traditional production techniques and quality fabrics, Howell’s clothes are simple and understated. Her designs are recognised for their purity of line, attention to detail and functional approach, yet always remain contemporary and modern in look and feel.