My Favourite Portrait by Michael Rosen 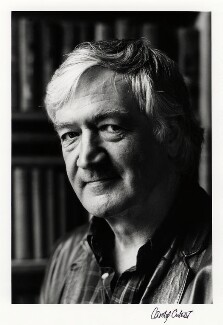 Carole Cutner's picture has caught Adrian Mitchell midway between several thoughts and expressions. Is he on the way to a full smile or on the way back from one? Is he being mischievous or is he about to reveal a favourite story about William Blake?

Adrian was a figure whose poetry, plays and stories wove in and out of very many people’s lives, and it hurts to think he isn’t with us now. In my late teens I saw him as someone who had brought poetry out into the open. As the Vietnam War unfolded, Adrian found the voice that expressed the horror of it and it rang out within earshot of this very building – from the plinth in Trafalgar Square. That war – and all wars – made him feel, he told me, as if he were suffering from ‘compassion fatigue’. ‘Tell me lies about Vietnam,’ he implored. And the irony of that was, in a way, that it’s just what we were told, and it didn’t make things feel better.

He was a man of passions, though when he was quiet, as in this photo, that side of him wasn’t visible. William Blake, for him, wasn’t just a poet he liked or enjoyed; for Adrian he was a secular saint, someone who had grappled with the most important ideas an artist could ever try to express. When Adrian talked about writing for children, it wasn’t just because it seemed like a nice thing to do. It was because he was both delighted by the children he met, and appalled at the ways in which we ‘slap them down’, telling them they’re not good enough and not listening to them. When he performed his political poetry, he lived it through his voice, face, arms and body.

This picture reminds me of the occasions when we performed together, but also, better still, of those occasions when we just talked. He would listen, look down and to one side, shut his eyes for a brief moment, take an audible breath and say something he cared about. Not much small talk. There were times when he ticked me off about something and I would spend a few days – months, years even – thinking about it. If I look closely at the picture, I could believe he’s just about to do that now. Why should film-makers use poets’ lives for their own fantasies?
(I had said that I quite liked the Ted Hughes–
Sylvia Plath film Sylvia!) Doesn’t violence always
breed more violence?

Part of me doesn’t like photos of dead people I care about. The other part is grateful for the company they give. Looking at the intimacy that Carole Cutner has caught, I lean heavily towards the grateful.

Michael Rosen is an award-winning poet, writer and presenter, and currently holds the post of Children’s Laureate for 2007–09.

He writes fiction and picture books for children, including the award-winning We’re
Going on a Bear Hunt (1989). His poetry books include Quick Let’s Get Out of Here (1983). His Selected Poems was published in 2007, and he has written a variety of fiction and non-fiction for adults.