My Favourite Portrait by Neil Tennant 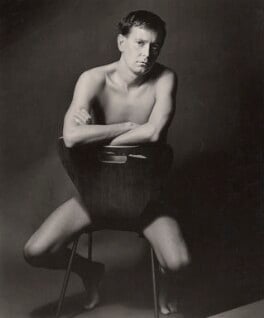 The playwright Joe Orton was a famously enthusiastic and guilt-free homosexual. In his works, written in the 1960s, he satirised conventional morality, revealing how much of it was merely a pose. To quote the last line of his most famous play, Loot: ‘We must keep up appearances.’

The photographer Lewis Morley was a contemporary of Orton and concentrated on theatre and the satirical scene of the early 1960s. In 1963, however, he created one of the most iconic images of the period when he photographed Christine Keeler, naked but with much of her body provocatively concealed by a very contemporary chair designed by Arne Jacobsen. The image still seems to epitomise the period’s public obsession with changing sexual morality. At the time it was much parodied and Morley even photographed David Frost in the same pose.

In his image of Joe Orton, taken two years later to publicise the American production of Entertaining Mr Sloane, Morley turned his famously heterosexual image into a frank homosexual statement: Orton is up for it and happy to announce the fact at a time when homosexual practices in Britain were still illegal. His attitude seems to say ‘Why not?’ According to Morley, Orton told him that ‘he wanted it to be known that he was the fittest, best-built playwright in the western hemisphere’. Like Orton’s plays, this image is provocative and satirical, making much of what is being concealed. As such, I think it’s a brilliant collaboration between Morley and Orton and a riveting image of the period.

Two years after it was taken, Orton was murdered by his lover and homosexuality in England was legalised.

On 5 April 1985, Neil Tennant quit his job as a journalist at Smash Hits to pursue a more active career in pop with architecture student Chris Lowe. The Pet Shop Boys went on to become the most successful duo in British pop history with 36 Top Twenty hits and ten Top Ten albums.