My Favourite Portrait by P.D. James 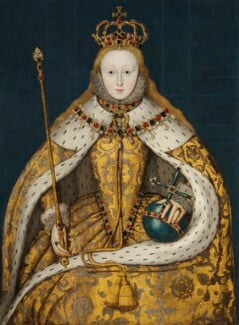 Queen Elizabeth I
by Unknown English artist
circa 1600
NPG 5175

It is impossible to choose a favourite portrait from the great richness of the National Portrait Gallery, but the portrait I never go to the Gallery without visiting is that of Elizabeth I by an unknown artist, painted about 1600 and usually known as the coronation portrait. It is not the only portrait of the Queen in the gallery, but for me it is the most remarkable. Here, robed in royal splendour, is the Protestant icon, as gorgeous as the images of the Virgin Mary in the dissolved monasteries and imbued with the same mystic authority. The impulse to kneel must have been irresistible, bent knees and bowed head, implying more than the customary homage to royalty. Here, symbolically clothed as England’s hope, the red crimped hair uncut, a symbol of the virginity she used as a political weapon, she is wearing the mantle of the cloth of gold, the kirtle which she wore at her coronation on 15th January 1559, and she holds the orb and sceptre, symbols of her authority. These symbols of majesty were designed to be held by a man, not a vulnerable woman, but she possesses them entirely. The eyes are enigmatic, the irises slightly up-turned and with little light, yet they compel the viewer with intelligence and determination. A visitor who knew nothing of England’s history would yet surely surmise that here was a remarkable woman destined to be an equally remarkable queen.

P.D. James is one of Britain’s most celebrated detective-story writers. Following a career as an administrator in the National Health Service and the Home Office, P.D. James turned her hand to writing fiction, enjoying great success with novels such as Shroud for a Nightingale (1971), The Black Tower (1975), Death of an Expert Witness (1977), Innocent Blood (1980) and A Taste for Death (1986), many of which have been adapted for television. In 1991 she was raised to the peerage as Baroness James of Holland Park.