My Favourite Portrait by Sonia Boyce 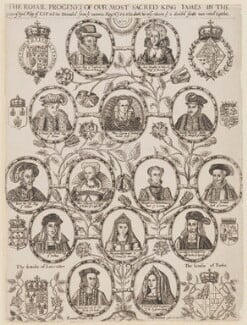 The Roiail Progenei of our Most Sacred King James
by Benjamin Wright, after Unknown artist
published 1619
NPG D1370

History was always one of my worst subjects at school. I often disrupted lessons, through a misplaced kind of working-class bravado and in protest at the authority of the classroom teacher, but also as an expression of sheer boredom with the subject. To be more honest, it was a much more hollow feeling that all these English kings and fewer queens were absolutely remote from my daily life – a girl of West-Indian parentage, growing up in east London during the 1970s. Inevitably, in a perverse backlash, history has come to play a central part in the development of my art practice.

When I was invited to reconstruct an artwork of mine, Devotional, an ongoing collaborative project assembling the names of black British women in the music industry from the turn of the twentieth century to the present, I was unsure how I would transform what had been a very colourful list of names into a more spatial monochromatic drawing. On my first visit to look at the proposed gallery Eddie Otchere, Inspire Fellow Contemporary Curatorial Assistant, took me on a tour.

Making our way through the Tudor Galleries to the 17th-century gallery, we came on a small gallery of miniature works, almost tucked away. There, in a cabinet, sits a rather beautiful engraving: a royal family genealogy that establishes King James I as rightful successor to the crown. An infantile part of me finds it amusing that a king would need to verify his position, one imagines that such accessions are pre-determinded, a fait áccompli. Anyway, I have always loved and sometimes used pattern and decoration as a narrative device and the very graphic structure of The Roiail Progenei of our Most Sacred King James (1619) immediately makes apparent biographical relationships between people. And for my purposes it became a perfect solution to visually refigure and restructure a set of relationships between a diverse range of performers.