My Favourite Portrait by Tristram Hunt 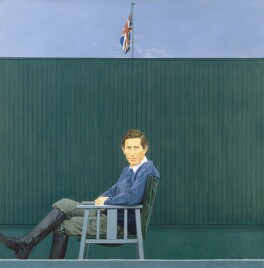 Part of the intrigue of portraiture is that one can admire the composition without necessarily caring greatly for the character on the canvas. So it is with Bryan Organ’s playful, telling, even predictive portrait, ‘His Royal Highness Prince Charles, Prince of Wales’.

Commissioned in 1980, long before the worst of the Wales’s tribulations (indeed, even before their marriage), it masterfully catches the awful nature of being heir to the throne. In Alan Bennett’s apposite phrase, it is a predicament rather than a position.
Lolling on a field chair, Prince Charles is simply waiting. And in that pose, Organ brings to the fore the youth yet age, the authority yet the futility of Prince Charles’s situation.

As such, the work is part of a broader narrative about modern British monarchy. Cut off from Charles by a high Windsor green wall, the Union flag flops disconsolately. Empire and England seem visibly to be retreating – all the more so given that the portrait often hangs in the faded glory of the high-Victorian portico (far from the modernism of the Ondaatje Wing) alongside Pietro Annigoni’s confident, imperious depiction of a supremely regal Queen Elizabeth II.

What of Charles himself? He jauntily swings his leg and appears relaxed in casual sporting gear. But his eyes avoid your gaze and seem instead to focus on events over your shoulder. Perhaps his thoughts are with George VI staring back from the other corner.

But, read another way, Organ’s portrait is a subtle celebration of the modesty of a modern prince. Gone are the symbols of war and empire, the outfits and medals. Instead, we are left with an all too human figurehead sitting on the verge of some truly anni horribiles which will test the man and his monarchy to the hilt. The enigmatic skill of the painting is that it is all those things and more.

Tristram Hunt is a lecturer in history at Queen Mary College, University of London. He is the author of Building Jerusalem: The Rise & Fall of the Victorian City (Weidenfeld & Nicolson).