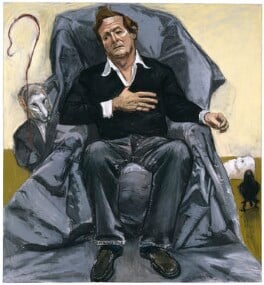 Issue 17
Taken from the Face to Face newsletter

When the playwright Sir David Hare was first approached by the Gallery about sitting for his portrait, Paula Rego’s name quickly sprang to mind. Although the Anglo-Portuguese artist hardly ever takes on portrait commissions and rarely paints men, she had met Hare on a number of occasions. In addition, for an artist whose work is bound up in storytelling and mythology, the idea of painting Hare fired herimagination. ‘I woke up one morning and thought, I’m going to do this’, she said. Ten three-hour sessions followed in the artist’s London studio in the summer of 2005. Portrait sittings can be gruelling but the two got along famously, entertained by the songs of Dusty Springfield and Burt Bacharach.

Describing the portrait as a work ‘with the whole of theatre in it’, Rego herself assumed the role of director. Hare, who adopted a tender and introspective pose, has described the painting as ‘a portrait about what’s going on inside’. At Rego’s instigation, his right hand is held over his heart in a dramatic devotional gesture. He is dressed predominantly in grey; his taffetacovered armchair suggests a rocky landscape. Characteristic of Rego’s creative practice, there is a strong narrative element, with the suggestion of a performance taking place. Of the lamb dressed in a
suit with a crook, a prop made by the artist, Rego said: ‘The little face of the lamb looks quite old; it’s quite a worried, touching face. The things I couldn’t get into
David’s face I put into the sheep’s face. It’s complementary; it goes well with him and looks after him.’ Hare’s left hand falls over the arm of the chair, as though clasping a pen but also perhaps feeding the crow beside him. With a nod to James Ensor, an early inspiration that Rego cited for this painting, a theatrical mask lies on the floor.

Although Hare saw the painting as it evolved in Rego’s studio, it was only when he saw it at the Gallery that its full impact hit him. ‘Her studio is a place of grotesquerie; next to all that I seemed quite normal. But as soon as I saw it in the viewing room of the National Portrait Gallery I looked as mad as a hatter. It isn’t a portrait of someone I’d necessarily want to meet – or at least be very close to … it’s a portrait of someone in a great deal of distress.’

On the contrary, Rego sees the image as quite benign. ‘It’s an affectionate picture, a picture of the man of the theatre. It’s not at all shocking. He just looks handsome. He’s thinking. He’s introspective.’ This dialogue, played out on the front pages of the Guardian on the eve of the portrait’s unveiling, highlights the difference between the artist and her subject’s reaction to a personal and revealing image destined for a public space. However, although his reaction has been misinterpreted by some, Hare is in fact deeply moved by the portrait and sees it as a lasting image with a shifting, multi-layered meaning: ‘I can’t see it yet – like a play, it will change. Basically, this is my only chance at immortality. I realised that if Paula Rego painted me, this is how I will always be remembered.’