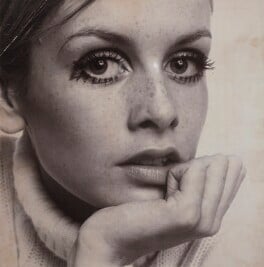 Issue 30
Taken from the Face to Face newsletter

AS FASHION MODEL and photographic muse to many of the world’s most significant photographers, Twiggy personified the particular ‘London Look’ that forever defined the late 1960s. Aged only sixteen, frecklefaced, five foot six and weighing only six-and-ahalf stone, Lesley Hornby – born sixty years ago this September – was an unlikely candidate to become the world’s first supermodel.

This she achieved in a modelling career that ran initially from early 1966 to the end of the decade, just four years. She collaborated with the leading photographers of the time: Cecil Beaton, Helmut Newton, Norman Parkinson, Guy Bourdin, David Steen and Linda McCartney in England; Francesco Scauvullo, Melvin Sokolsky and Bert Stern in the United States, culminating with multiple sessions in Paris and New York with the most highly rated fashion photographer of the era, Richard Avedon.

In December 1969 Twiggy became the youngest person ever to appear on the long-running television series This Is Your Life. During the early 1970s she changed direction to start a career in theatre, film and dance – her musical career began with two Golden Globe awards (for Most Promising Newcomer and Best Actress in a Musical) for her starring role in Ken Russell’s film of Sandy Wilson’s musical pastiche, The Boyfriend (1971).

The display includes images from The Boyfriend taken by Douglas Kirkland, as well as several portraits by Cecil Beaton, one of which was displayed in the Gallery’s first retrospective exhibition of the photographer’s work, staged in 1968. Other examples from the 1960s are portraits taken by the British-based American photographer Ron Traeger and the South African-born fashion and beauty photographer Barry Lategan, who first moved to England in the late 1950s.

It was Lategan’s image of Twiggy modelling a new haircut by star hairstylist Leonard that launched her career. Deirdre McSharry, fashion writer for the Daily Express, saw it at Leonard’s salon in Upper Grosvenor Street and proceeded to track down and interview the girl with the striking looks. Announced as the Face of 66’, from then on Twiggy was in constant demand, fulfilling a career without a fashion agency. Over the next three decades Twiggy made several films and albums and appeared in numerous TV series here and in the US. Most famously she starred on Broadway in New York in the Tony award winning musical My One and Only (1983–4) which ran for almost two years.

In 1993 Twiggy returned to modelling with a dramatic portfolio shot by Steven Meisel for Italian Vogue magazine, and in the last ten years she has worked with a roll-call of contemporary photographers ranging from Brian Aris, Annie Leibovitz, Bryan Adams and Mary McCartney to Solve Sundsbo, who photographed her for the cover of the cutting-edge fashion magazine i-D.

In addition to the display, the Gallery will be publishing a book showcasing a fuller selection of photographs, with accompanying text by Twiggy.