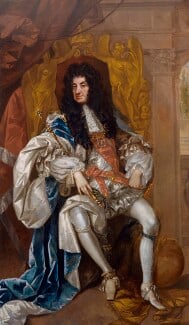 Charles II’s life was hugely eventful. During the Civil War he saw service at the Battle of Edgehill aged only twelve and he continued to fight until he was sent abroad for safety aged fifteen. When he was twenty-one he launched a daring invasion of England, which ended in defeat at the Battle of Worcester. Charles spent six weeks on the run before he escaped the country disguised as a servant. He was restored to the throne in 1660 but in 1665 was forced to flee from London with his family to avoid the plague. Charles also had a busy private life; his court was notorious for its easy-going morality and he fathered fourteen illegitimate children by seven mistresses. Hardly surprising then that when the Great Fire of London broke out in 1666, this man of action personally directed the fire-fighting effort and worked manually with his brother James to throw water on the flames.

On display in Room 7 at the National Portrait Gallery