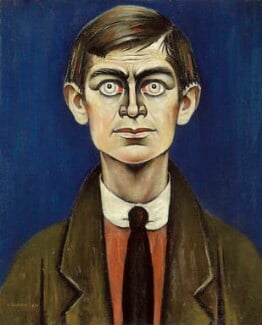 During his lifetime, L.S. Lowry gained wide public recognition for his paintings of everyday life in the industrial districts around Salford. In 1967 the Post Office issued a stamp reproducing one of his paintings and in the same year he refused a knighthood proposed by the Prime Minister, Harold Wilson. But alongside his successful career as an artist, he worked full-time for over forty years as a rent collector for the Pall Mall Property Company in Manchester. The job led him to walk all over the city witnessing scenes that he then depicted on canvass.  Due to his ‘nine-to-five’ hours he painted in the evenings, often working until the early hours of the morning. Lowry kept his occupation a closely guarded secret during his life, as he did not want to be known as a part-time ‘Sunday painter’. The truth was not made public until after his death in 1976.

On display in Room 31 at the
National Portrait Gallery