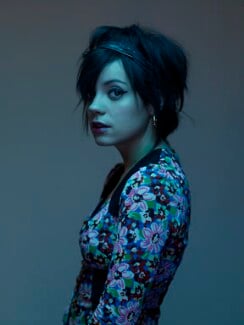 Lily Allen burst onto the pop scene in 2006 with her single ‘Smile', which became her first number one hit in the UK singles chart. She was one of the first artists to use her MySpace profile to attract an audience for her music, posting demos and frank blogs, which made her one of the most popular artists on the site. Before she hit the public stage, Lily had a variety of occupations, including acting and bar work, although she always hoped to break into the music and entertainment industry. She also spent time studying to be a florist, which she loved - except for the early mornings. Her best selling flowers, she says, were peonies.

Find out about the Photographs collection

Search for other musicians