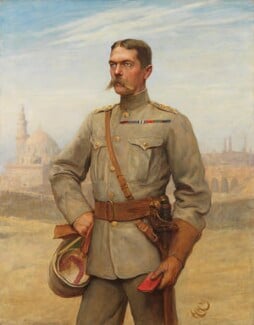 At the onset of the First World War, the Prime Minister, Herbert Asquith appointed Lord Kitchener as Secretary of State for War. Kitchener, at the time Viceroy of Egypt and the Sudan, was the first military officer to hold this post. Predicting a long war that would require a huge army, Kitchener embarked on an unprecedented recruitment campaign, symbolised by the distinctive poster that made his face famous. He rapidly enlisted and trained vast numbers of volunteers for a succession of entirely new 'Kitchener armies'. Kitchener also associated himself with a Red Cross plan to exhort British, American and Canadian women to knit various 'comforts' for the men in the trenches, including mittens, scarves and socks. He is said to have contributed his own sock design, which included a square-ish 'grawfted' toe. The toe featured a seamless grafting stitch that made socks more comfortable for troops to wear, and which became known as the ‘Kitchener stitch'.

On display in Room 23 at the
National Portrait Gallery

Search for other soldiers