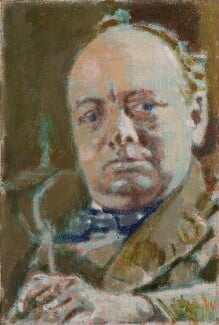 In 1899, Winston Churchill travelled to South Africa to report on the Boer War for the Morning Post.  Shortly after his arrival on the Cape, he boarded an armoured train setting out on a scouting expedition. The train was derailed and brought under heavy gunfire by a Boer ambush, and all the passengers who were not killed were taken prisoner. They were held in prison in Pretoria but, after a just few weeks' incarceration, Churchill took an opportunity to climb over the prison wall. He walked through the night until climbing aboard a train and hiding among sacks covered in coal dust. After spending a day in the home of a colliery manager he hid aboard another freight train loaded with bales of wool. On the train's arrival in Portuguese East Africa, Churchill presented himself to the British Consul. His escape created a sensation and brought him immediate fame.

On display in Room 31 at the
National Portrait Gallery