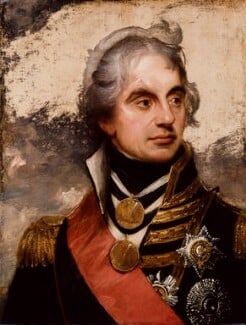 Horatio Nelson spent much of his life at sea. He joined the navy aged twelve, became a captain at twenty and was made admiral at thirty-nine. For much of his naval career he was at the front line in the thick of battle. In 1793, he lost his sight in one eye in a successful attack on Corsica and in 1797 he lost his right arm at the Battle of Santa Cruz de Tenerife. During these years at sea Nelson also fought a personal battle with chronic seasickness, a condition which plagued him throughout his life. In a letter to his lover Emma Hamilton in 1801 he wrote ‘I am so dreadfully sea-sick, that I cannot hold up my head!’ Nevertheless, through his inspirational leadership and audacious tactics, the British fleet won many key victories and his death at the Battle of Trafalgar in 1805 enshrined him as a national hero. This final victory is commemorated by Nelson’s Column, just a stone’s throw from the Gallery in Trafalgar Square.

On display in Room 17 at the National Portrait Gallery