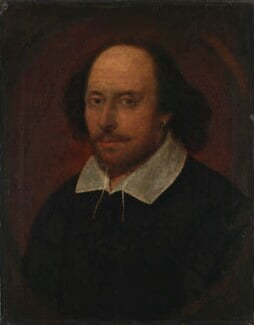 William Shakespeare is widely regarded as the greatest writer in the English language but he was also a highly successful poet and playwright in his own lifetime. His work was so profitable that he was even able to lend money to his fellow citizens in Stratford-upon-Avon and documents from the time show he was prepared to take legal action to recover any outstanding debts. In 1604, he sued a neighbour, Philip Rogers, for not repaying a loan of 35 shillings and in 1608 he pursued John Addenbrooke in the courts for a debt of £6, to which he added 24 shillings in damages.  So it seems that Shakespeare was prepared to go to the courts to recover even a small sum. However, in 1608 he may have been in need of additional income as all the theatres had to be shut down due to an outbreak of the plague.

On display in Room 4 at the
National Portrait Gallery

Explore other portraits which feature earrings