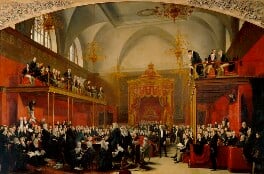 From the National Portrait Gallery's remarkable collection of the work of Sir George Hayter, portrait and historical painter to the young Queen Victoria, comes this selection of the artist's little known studies for his two large Parliamentary groups, The Trial of Queen Caroline, 1820, set in the House of Lords, and The Reformed House of Commons, 1833.

These two groups show the old Houses of Parliament which were destroyed in the Palace of Westminster fire of 1834. Both pictures are extremely carefully constructed to reflect the character of the building and the great historical events they record, and to incorporate numerous portraits: nearly 300 in the House of Lords and nearly 400 in the Commons. The Gallery owns some 75 studies for the two paintings of which more than a third will be included in this new display. 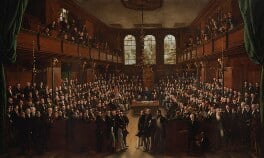 The Trial of Queen Caroline, as it was called, was one of the great events of the age. It was not in fact strictly a trial but an enquiry into the scandalous conduct of King George IV's estranged wife during her wanderings abroad as Princess of Wales. Hayter's lively pen-and-wash sketches show him working out the figure groupings within the composition; once these basic requirements were satisfied he went on to make drawings and oil portrait sketches of many of the individual people featured, including several fine studies of the Queen herself.

The picture of the Reformed House of Commons shows a great political event : the first parliament to meet after the passing of the Great Reform Bill of 1832, itself the climax of fifty years of agitation for parliamentary reform. The process was held up by the Napoleonic war and then by the reluctance of the Tory party, in power for more than twenty years, to engage with the issue. Only with the election of the Whigs under Lord Grey in 1830 did the movement for reform become unstoppable. Numerous portrait sketches in oil survive for individual figures including a telling image of the Irish nationalist MP, Daniel O'Connell.

This display is the second in a series designed to show unfamiliar drawings from the Gallery's fine collection. It links to the opening of the new IT Gallery, which features Hayter's two large Parliamentary groups and related studies in the Woodward Portrait Explorer, a new IT programme designed to enhance appreciation of the collections of the National Portrait Gallery.