Portraits in Profile: The Dighton Family 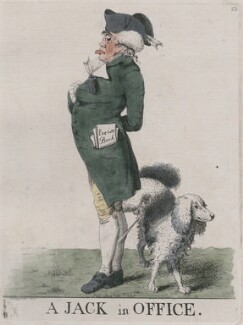 The Dighton family was one of the most notable artistic families of the Regency period. This display presents a selection of approximately thirty eight hand-coloured etchings, dating from the 1790s to the 1820s, by Robert Dighton Snr (1751-1814) and his three sons, Robert Jnr, Denis and Richard.

Less harsh than the offerings of their contemporaries, such as James Gillray and George Cruikshank, these humorous studies offer invaluable depictions of prominent personalities of the period - members of the royal household, parliament, military, society, city and stage. In addition they provide unique portraits of colourful local characters who were clearly well known at the time.

The Dighton family's output of full length portraits established a tradition which would continue and evolve; the Vanity Fair cartoons being direct descendants of such a tradition. 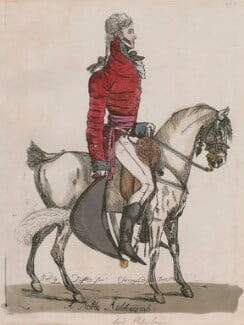 Portraits in the exhibition

This guide is drawn from the National Portrait Gallery's substantial reference collection, consisting of over 80,000 portrait engravings amassed since the Gallery's foundation in 1856 and now housed in the Heinz Archive and Library.