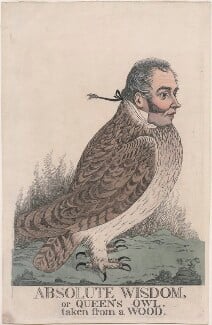 Richard Dighton, best known for his numerous portraits of City and West End characters, was the most prolific of Robert's three sons. Apprenticed in his father's studio at Spring Gardens, he continued the production of full-length, profile etchings. The first print bearing his name appears in 1815. He began his extensive series of City and West End characters in 1817, publishing over one hundred etchings during the next ten years.

As well as publishing relatively 'straight' portraits under his own name, a set of six humorous plates by Richard was issued by Thomas McLean of 26 Haymarket in 1821. In addition, over a dozen of Richard's anti-radical satirical prints were published by G. Humphrey during 1821-2.

In 1828 Richard ceased producing etchings and moved to the provinces - Cheltenham and Worcester - where he lived and worked from numerous addresses over the next twenty years, before returning to London. His artistic output seems to have chiefly been watercolour portraits and, from 1835 onwards, lithographic portraits - both though continuing the traditional full-length, profile format.

His style is tighter and more methodical than his father's.