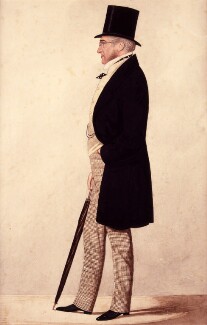 Richard Dighton's eldest son, Richard Jnr (1824-1891), also followed an artistic career. Richard Jnr's earliest known work is a watercolour equestrian portrait of the 3rd Earl of Sefton, dated 1844, now in the collection of the Walker Art Gallery, Liverpool. He later established himself as a photographer and had a studio at Weston Villa, Cheltenham.

Joshua Dighton (1831-1908), born in Worcester, the second son of Richard Snr, is perhaps best known for the portraits of jockeys which he produced. Joshua's earliest work is an equestrian portrait of Fulwar Craven of 1845, in the collection of the Cheltenham Art Gallery. He worked in Hammersmith, Merton, Wimbledon, Pimlico and Battersea producing watercolour portraits like the one shown here.

There has been speculation that Joshua was a fourth son
of Robert Dighton Snr, often cited as having produced watercolour drawings of sporting personalities between 1820 and 1840. There is no clear evidence to substantiate such a claim and it probably arises from confusion.