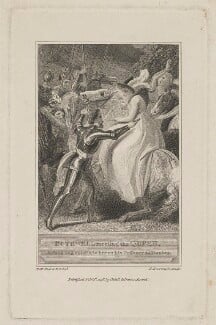 Over the centuries since her execution for treason in 1587, the character and appearance of Mary, Queen of Scots have been the subjects of continuing fascination. Drawing on works from the the Gallery's reference collection, this display looks at the ways in which she has been depicted, particularly in prints, from her own time to some of the nineteenth century.

Sections
The True Likeness
In spite of the fascination with which she was regarded both during her own lifetime and subsequently, there are relatively few authentic portraits of Mary, Queen of Scots by comparison with her cousin and contemporary, Elizabeth I of England. While in France as a child and young woman Mary was drawn several times by the court artist Francois Clouet, but from the turbulent period of her life in Scotland there remain only images on coins and possibly one miniature. During the long period of her exile and captivity in England, from 1568 until her execution in 1587, she sat for other portrait miniatures, including one by Nicholas Hilliard, the famous English miniaturist. This exists today in two versions, in the Victoria and Albert Museum, and in the Royal Collection (see illustration). With the death of Elizabeth I, and the succession of Mary's son James VI of Scotland to the English throne as James I, came the opportunity - indeed the need - to rehabilitate Mary's reputation. Hilliard's miniature formed the basis for many portraits of her produced at this time. Another use to which Hilliard's miniature and the French drawings were put, from the time
of Mary's execution onwards, was in the production of posthumous imagery promoting her as a Catholic martyr.

The Search for Authenticity
Although Mary remained a focus of some interest in the century after her death, the popular fascination with her greatly increased in the eighteenth century, stimulated particularly by the growth antiquarianism. Over the course of the century a number of standard histories were published that became immensely popular. At the same time the print trade was expanding rapidly, and the collecting of portrait prints of historical figures was greatly encouraged by the publication of James Granger's Biographical History of England (1769). Granger's book combined brief biographies of historical figures with comprehensive lists of engraved likenesses. From 1717, the newly re-established Society of Antiquaries employed the antiquarian and artist George Vertue to engrave and publish authentic historical portraits, and Vertue also engraved portraits as illustrations for several histories. Other printmakers and antiquarians followed suit, making genuine attempts to track down true likenesses of historical figures, including Mary, Queen of Scots, whose reputed beauty and dramatic life story made her particularly appealing in this context. However, misdating of historical costume and painters' styles, and sometimes deliberate deception, led to the incorrect identification of many portraits.

The Drama of History
The great popularity of history and of history books in the eighteenth century stimulated not just the antiquarian search for authentic portraits but also a great increase in narrative history painting. Mary, Queen of Scots was an obvious subject, her life providing so many incidents of either high drama, emotion, or both. Gavin Hamilton's painting Mary, Queen of Scots resigning the throne, commissioned in 1765 by James Boswell and finally exhibited in 1776, was the first of many such paintings. Although Hamilton, unlike many of his eighteenth-century successors, was interested in finding authentic images of Mary as inspiration for his depiction of her, he was wary of the constraints such portraits might put on him. He is recorded as saying, 'beauty in distress is what I mean to represent and Mary's features I hope will not interfere with the representation'. Late in the century and early in the nineteenth century the most important patron of history painters was Robert Bowyer (1758-1834). He commissioned for his Historic Gallery over a hundred paintings of scenes from British history, which he had engraved as illustrations to an edition of David Hume's The History of England. In the nineteenth century the novels of Walter Scott were a particular influence on history painters, and there was a tendency towards greater historical accuracy, as well as more intimate, domestic scenes.

1542
8 December: Birth of a daughter, Mary, to James V of Scotland and Mary of Guise
14 December: Death of James V and accession of Mary to the throne

1568
2 May: Mary escapes from Lochleven Castle
16 May: Mary flees into England to seek protection from Elizabeth I, following the defeat of her forces at Langside by Moray's troops
18 May: Mary taken into protective custody in Carlisle. She is later accused of involvement in Darnley's murder and imprisoned in various English castles for eighteen years

1586
15 October: After increasing concern that Mary is a focus for Catholic rebellion in England, a trial is held at Fotheringhay Castle

1603
23 March: Elizabeth I dies and James VI of Scotland succeeds to the English throne as James I