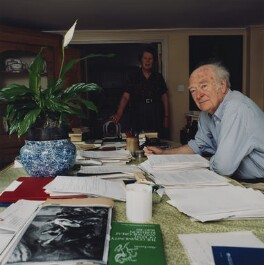 This is a record of the great and the good in the art establishment at the beginning of the new millennium. It celebrates the contribution of the postwar generation, epitomized by the late Sir Ernst Gombrich, who brought new levels of academic rigour to art history, as well as the achievements of the current generation. Some are distinguished by their leadership of major national institutions; all are distinguished by their scholarship. Some are famous; others are unsung heroes. The portraits, formal and considered, reflect the stature of their subjects. The settings, chosen by the sitters, whether at home, or at their place of work, reflect their passion.

Lucy Dickens took a BA in Photography at Central London Polytechnic and has combined her career in photography with spells of teaching. Recent projects include an artist residency for Southern Arts in Windsor in 2000. In 2002 Dickens worked on the Arne Jacobsen retrospective for the Museum of Modern Art, Oxford, photographing St Catherine's College for the exhibition and publication.

The photographer is about to embark on a collaboration with Plantlife, the wild plant conservation charity, to photograph leading environmentalists. This portfolio of 42 photographs is being shown in two parts; part one runs from 10 September until 8 December, 2002 and part two from 10 December until 2 February, 2003. The portraits were taken with a Bronica camera on 21/4 inch colour negative film and the c-type photographs were hand-printed by the artist.