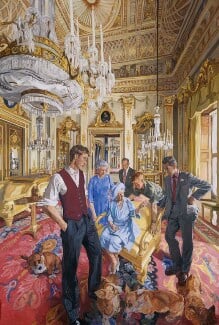 To mark the Golden Jubilee a number of contemporary photographers from Britain and the Commonwealth were invited to take portrait photographs of The Queen. The photographers are HRH the Duke of York, the Earl of Lichfield, Bryan Adams, Polly Borland, Julian Calder, Anthony Crickmay, Fiona Hanson, Rankin, David Secombe and John Swannell. A selection of these works will be on display.

Royal Landing Displays
Current royal portraits on display include the John Wonnacott painting of four generations of the Royal Family and the Annigoni portrait of H.M. The Queen.

Queen Elizabeth II, by Andy Warhol, 1985
In celebration of the Golden Jubilee one of the Gallery's most popular images, Andy Warhol's Queen Elizabeth, is on show. This multiple image of The Queen, derived from an official 1977 Jubilee photograph, is one of a series by Warhol entitled Reigning Queens.