Beaton's first love was the theatre, and from creating the sets for his photographs it was a small step into stage design. It began to take precedence over photography after the Second World War, when he created numerous costume and set designs for ballets, opera, plays and film productions. His designs were stylish, romantic and sumptuous and frequently set in the opulent Edwardian and pre-war period of his childhood, epitomized by his greatest stage success, My Fair Lady, in 1956. In 1963 he also won two Oscars for the film version for his costume designs and art direction, following his first Oscar for Gigi in 1958.

Reproduced in Beaton's The Glass of Fashion (1954). Another product of his fascination with costume, this was a personal survey of the fashions and style-leaders of the first half of the 20th century, and it remains one of the best works on the subject. Beaton amassed a large collection of dresses by the world's greatest designers, part of which was exhibited at the V&A in Fashion - An Anthology  (1971).

Beaton travelled widely in the East both as a war photographer, recording his experiences in Near East (1943) and Far East (1945), and again in 1957. He returned with art treasures and notebooks full of sketches which he used when designing the sets and 400 costumes for a production of Puccini's last opera Turandot at the Metropolitan Opera House, New York (1961) and Covent Garden (1963). 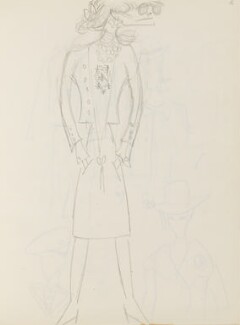 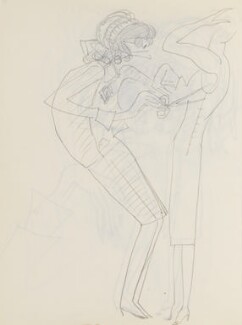 Chanel revolutionised women's fashions in the 1920s with her casual, liberating clothes which brought her popularity with the 'new women' of the era.

Beaton photographed her at the height of her career in the 1930s. He also sketched her in Paris in the 1950s and 1960s prior to designing the award-winning costumes and sets for the musical Coco on Broadway (1969) in which Katharine Hepburn starred as Chanel.