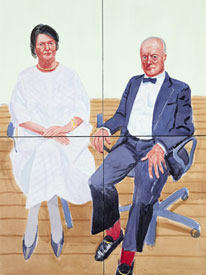 A selection of new double portraits by David Hockney (b.1937) are on display at the National Portrait Gallery until 29 June 2003. The centrepiece of this display is the recently completed portrait of Glyndebourne opera impresario Sir George Christie, and his wife Mary, commissioned by the Gallery. This acquisition is a significant addition to the Gallery's collection of works by one of Britain's most celebrated contemporary artists. The display coincides with an exhibition of new landscapes and portraits by Hockney at Annely Juda Fine Art, London until 1 March 2003.

Sir George Christie was Chairman of Glyndebourne Productions for over 40 years. He inherited the position in 1956 from his father, John, who founded the Glyndebourne Opera Festival in 1934. During George Christie's chairmanship, Glyndebourne's style of opera production became more diverse and the repertoire was expanded. In 1968 the Glyndebourne Touring Company was founded and 1994 saw the capacity of the opera house greatly enlarged with a new building by Michael Hopkins and Partners. In 2000, Christie's son Gus took over as Executive Chairman. Sir George and Lady Christie have been married since 1958. Hockney's friendship with the Christies dates back to the 1970s, when he undertook the stage designs for John Cox's Glyndebourne productions of The Rake's Progress (1975) and The Magic Flute (1978).

This portrait commission became the catalyst for a larger series of watercolour double portraits of Hockney's friends, four of which will be displayed alongside the Christies at the National Portrait Gallery and others to be shown at Annely Juda Fine Art. Dating back to his iconic portrait of Mr and Mrs Clark and Percy in the Tate collection, Hockney has long been interested in the dynamics of the double portrait. In search of a contemporary approach, Hockney began exploring watercolour further earlier this year and found its immediacy and fluidity lent itself to producing portraits directly from life. Painted on a large-scale on four watercolour tablets, each portrait was produced in one seven-hour sitting.

David Hockney studied at the Royal College of Art from 1959-1962 and was instrumental in the founding of the British Pop Art movement. He has had numerous solo exhibitions worldwide and is one of Britain's most internationally acclaimed artists. He lives in Los Angeles.