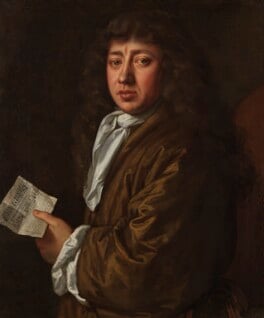 2003 marks the tercentenary of the death of the famous diarist Samuel Pepys (1633 - 1703). The National Portrait Gallery will be celebrating the occasion with a special display and a two-day conference in September.

Samuel Pepys recorded his observations about life in London after the Restoration at a dramatic moment in history. He was among those who brought Charles II back to England to be crowned King and he watched the fire of London engulf the city in 1666. As a successful civil servant he had access to influential circles and his remarkable diary, begun in 1660, records his relationships with hundreds of men and women of his time. A special display in Room 6 will explore their lives and personalities through Pepys's critical and perceptive eye.

Portraits on display include many of those who knew Pepys well, such as Navy colleagues, actresses, painters, his patron Edward Montagu, (Earl of Sandwich) and the King himself. Pepys's own wife Elizabeth, whom despite his many infidelities, he clearly loved, is represented by a plaster bust. Portraits of his associates Sir John Harman, Sir William Petty, George Monck, (Ist Earl of Albermarle) and the architect Christopher Wren have been brought out of storage especially for this display.