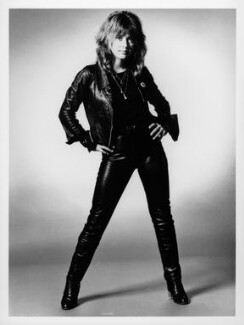 Lucy O'Brien's book She Bop II The Definitive History of Women in Rock, Pop and Soul is the focus of this Bookshop Gallery display. She Bop II is the second, updated and revised edition of the pioneering book first published in 1995 that gave a feminist perspective and comprehensive overview of women's contribution to popular music from the early American Blues singers of the 1920s up to the present day.

In preparation of this book O'Brien conducted over 250 interviews in Britain and America between 1984 and 2001 to make it an indispensable and comprehensive study.

Previously Lucy O'Brien has published two best-selling monographs on Annie Lennox (1991) and Dusty Springfield (1989,1999) as well as having crucial first-hand experience of female empowerment by being in her own girl punk band in the late 1970s, The Catholic Girls.

This display of twenty works from the 1960s onwards, ranging from Marianne Faithfull to PJ Harvey via The Slits, is supplemented with a prequel featuring eight other portraits of early pop women that can be seen on the First Floor in Room 31 (until 1 September 2002). This includes the first all woman group The Ivy Benson Band and other icons such as Shirley Bassey and Petula Clark who were as famous in the 1950s as they are today. All these and other rock and pop images can be accessed through touch screens in the easy-to-use IT Gallery located off the Main Entrance Hall in the Ondaatje Wing.

The National Portrait Gallery would particularly like to thank all those involved in the preparation of this show, especially Lucy O'Brien who first suggested the idea and all the photographers: Allan Ballard, Andrew Catlin, Caroline Coon, Jill Furmanovsky, Ian Dickson, Gered Mankowitz, Terry O'Neill, Mike Owen, Sheila Rock, Pennie Smith, Eric Watson and Val Wilmer. They have kindly allowed their work to be included and have produced the archival prints shown here that we are delighted to be able to add to the Gallery's permanent collection.