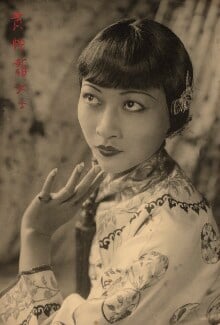 Anna May Wong was born Wong Liu Tsong (translated as Frosted Yellow Willows) on 3 January 1905 in Los Angeles to second generation Chinese-American parents. This display celebrates the centenary of the birth of the most important Chinese-American film star of the twentieth century.

Part of what makes Anna May Wong such an icon is the number of famous photographers that she sat to and collaborated with to produce images that transcend mere portraiture and elevate the results into high art. In America these include works by Edward Steichen, George Hurrell and Carl Van Vechten. Other memorable images, that also appear in histories of the art of photography, were made in Germany by Alfred Eisenstadt and Lotte Jacobi. Fortunately most of the key studio portraits taken in London survive at the National Portrait Gallery and make up this display. They range from a signed vintage print from the early stills and studio photographer Fred Daniels, who was recruited to work on Piccadilly, to the leading West End photographers Dorothy Wilding and Paul Tanqueray. The recently rediscovered portraits by Dudley Glanfield were first published in the March 1929 issue of Theatre World to herald her London stage appearance in Circle of Chalk. Anna May Wong made over sixty films in her career. She is best known for her role in Joseph Von Sternberg's Shanghai Express (1932) in which she starred alongside Marlene Dietrich. Wong made her screen debut in The Red Lantern (1919) and after appearing in five further films had her first starring role in Technicolor's first two-strip colour film, The Toll of the Sea (1922). This led to her casting in Douglas Fairbanks Snr's silent classic The Thief of Bagdad (1924).

In order to take on new challenges she travelled to Europe and visited England in 1928 causing an immediate sensation. She made several European films, many directed by Richard Eichberg, who first directed her in Song (1928) in Germany.
In London E A Dupont directed Wong in her most famous European film Piccadilly (1929) from a script and story by Arnold Bennett. Subsequent films she made in England included Elstree Calling (1930), Tiger Bay (1933) and Chu Chin Chow (1934). Anna May also appeared on stage alongside Laurence Olivier in Circle of Chalk (1929) and later toured England with a variety show in 1933-4 (See illustration).