Juliet Pannett: Chronicler of her Times 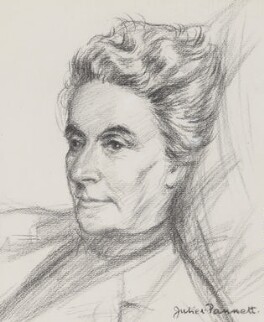 The portrait painter Juliet Pannett was born in Hove in 1911 and is one of the oldest living artists to have work in the National Portrait Gallery collection. Throughout her long and prolific career she has recorded the faces of the great and good including many Prime Ministers, politicians, lawyers, judges, academics and musicians.

Pannett studied at Brighton College of Art in the 1920s and received her first portrait commission at the age of eighteen from Sussex County Magazine. She was employed to travel around the county drawing local characters, from blacksmiths and rabbit catchers to horse-cab drivers and Crimean war-veterans.

In 1934 Pannett was elected a member of the Society of Graphic Artists and began teaching at a girl's school near Crawley. She acquired her first studio in a mews in Hove and began her foreign travels with trips to Spain, Germany and Italy; a passion that was to last a lifetime. Forced to give up painting at the beginning of the Second World War, Pannett returned to it with enthusiasm in subsequent years and from 1957-64 was Special Artist to the Illustrated London News.

In 1989, at the age of 78, Pannett was commissioned to paint the Queen at Buckingham Palace. She has exhibited at the Royal Academy and the Royal Society of Portrait Painters and was awarded an MBE in 1993.

This display brings together a selection of Pannett's drawings from the 1950s, 60s and 70s in celebration of this her ninety-fourth year.