Lucian Freud in the Studio 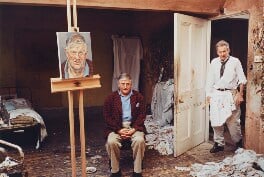 This display of photographs by Lucian Freud's studio assistant, David Dawson (b.1960), offers a fascinating insight into a contemporary master at work. Focusing on Freud's studio activity, these photographs give a rare glimpse of portrait sittings, studio visits and paintings in progress. Alongside the photographs, Freud's recent portrait of David Hockney will be seen for the first time in the UK at the National Portrait Gallery.

During his mornings at Freud's studio, Dawson has photographed the daily goings-on. The 17 remarkable images in this display include Hockney sitting for Freud; Freud painting his grandson Albie; Brigadier Andrew Parker Bowles posing; and Freud painting a grey gelding. Dawson also captures some of the few visitors to Freud's studio including artist Frank Auerbach and British Museum Director Neil MacGregor.

David Dawson is a painter and met Freud when he was working part-time for his then dealer, James Kirkman, in the late 1980s. He has been Freud's assistant for 12 years. Dawson has also modelled for Freud, including for the painting Sunny Morning - Eight Legs. He will be exhibiting in a painting show at Marlborough Fine Art in the autumn. He studied at Chelsea School of Art and the Royal College of Art.

The opening of this display coincides with Lucian Freud: Latest Paintings at the Wallace Collection, London (31 March - 18 April 2004) and Lucian Freud: The Complete Graphics at the Scottish National Gallery of Modern Art, Edinburgh (3 April - 13 June 2004).