Paul Tanqueray: Young in the Twenties 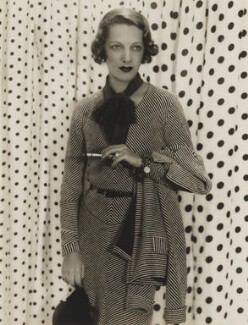 This showcase display of 20 works by Paul Tanqueray celebrates the centenary of his birth on 14 January 1905 in Littlehampton, Sussex, and his forty-year career (1925-65) as one of London's leading studio portrait photographers.

Tanqueray first became interested in the theatre and photography when he was at Tonbridge School (1920-1923) and won the school's Photographic prize. Through his contact with an ex-pupil of the school, the fashionable West End studio photographer Hugh Cecil, Tanqueray began his photographic career as one of his pupils.

Paul Tanqueray opened his first studio at 139, High Street, Kensington in 1925. He was then London's youngest photographer and in a perfect position to document an era that had become obsessed with youth and modernism.

Five years of success in Kensington led to a move the more fashionable West End of London at 8, Dover Street, near the Ritz Hotel and just off Piccadilly. Tanqueray's photographs appeared regularly in The Sketch and The Tatler and most frequently inside and on the cover of Theatre World. His work, including his 1929 and 1933 portraits of Anna May Wong, was also selected and hung at the annual London Salon of Photography.

During the Second World War Tanqueray worked mainly with the Chelsea Civil Defence and then re-opened his studio at 30, Thurloe Place in South Kensington where he continued to take photographs until his retirement in 1965. This display also contains several works from the 1950s including his portraits of the actress, dancer and star of the Pajama Game, Elizabeth Seal, the future Lady Olivier, now Dame Joan Plowright, and stage and film actress Claire Bloom.

In 1983 Tanqueray generously donated his negative collection of celebrities to the National Portrait Gallery, which joined 67 prints previously donated in 1975. As well as this display and the photographs on the other side of this case of Anna May Wong, more works can be viewed on the Gallery's website and on the Woodward Portrait Explorer in the IT Gallery.